Some of our members may be interested in attending this forthcoming conference to be hosted by the India and China Institute at the New School, New York City:


For the past three years, the India China Institute has been undertaking the second phase of a Luce Foundation supported research project looking at the intersection of religion, ecology and transboundary social and cultural issues in the Himalayas, known as the Sacred Landscapes and Sustainable Futures in the Himalaya Initiative (SHI). This project builds on the past three years of successful research as part of the Everyday Religion and Sustainable Environments in the Himalaya (ERSEH) Initiative.
The conference in April of 2017 will feature presentations from ICI’s core research team who has been working on this project for the past several years, as well as from our partners at ICIMOD and their work on the Kailash Sacred Landscape Conservation and Development Initiative (KSLCDI). You can learn more about both projects on our Sacred Himalaya Initiative page, including reading several published stories from the field, view interactive maps from the project area, and learn more about Mount Kailash and the many challenges and opportunities facing Himalayan mountain communities.

For more information about the conference and how to submit a paper proposal, please visit the webpage: http://www.indiachinainstitute.org/2017conference/ 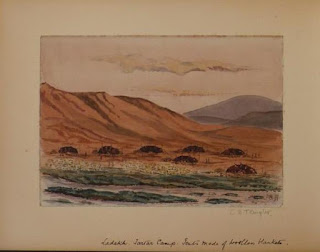 Here is a link to a blog on the British Library website by Diana Lange, who contributed to the 2013 IALS conference in Heidelberg:

As you can read on the blog, Diana has been working on the  'Wise Drawings', a set of 'picture maps' commissioned by a British official in the mid-19th century.  Diana has discovered the name of the official: a Major William Edward Hay, who was Assistant Commissioner in Kulu. However, we do not yet now the name of the monk who actually drew the images. 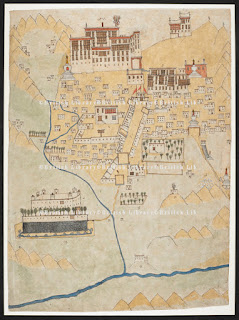 If you scroll down to the bottom of the Diana's article, you will see that you can now examine the drawings online. The image shown here (complete with British Library 'water mark') shows the Leh palace and bazaar. There is another showing parts of Zangskar, and still others showing the route between Ladakh and Lhasa.