The 16th Colloquium of the International Association for Ladakh Studies (IALS) will take place at the Department of Geography, South Asia Institute, Heidelberg University, Germany, from 17-20. April 2013. Under the overarching topic "Society and Environment in Ladakh: Historical Perspectives and Recent Dynamics", senior scientists, young researchers and practitioners are invited to discuss different topics related to Ladakh and its neighbouring mountain regions.
Following the tradition of the IALS, the conference has an explicitly interdisciplinary character. We therefore encourage participants from different scientific fields to submit an abstract. Possible focus areas for individual sessions include:
Additional information on registration, travel grants, updates on field trips, accommodation, and the conference programme will be posted on the Conference pages of the IALS website as details are finalised.

Any queries should be directed to Conference Convenor
Juliane Dame. Email: ials2013@sai.uni-heidelberg.de
Posted by Anonymous at 31.7.12 No comments: 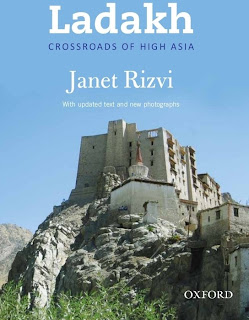 'Retaining the basic information from the original, this revised and updated third edition documents the changes and transformations that Ladakh has witnessed since 1996. From the region’s history to its importance as a confluence of various cultures and traditions to a detailed analysis of social, political and economic shifts before and after the Kargil war-it presents a deeply informed account of Ladakh and its people, permeated, moreover, by a radiant affection for them.

Scholarly yet lively, the value of this book, widely recognized as a one-stop reference on the region, is enhanced by the author’s recent research into contemporary realities.'
Posted by Gareth Wall at 15.7.12 2 comments:

LEH: The opening ceremony of the exhibition of a project called La Ngonpo, a three-year Czech-Indian Educational Project, was held on Friday in the Auditorium of Lamdon Senior Secondary School, Leh. Besides hundreds of students several dignitaries including from participating educational institutions and NGOs also witnessed the programme.

Exhibition featured examples of works by students and photographs reflecting and documenting the process of the project. Visual and literary works of Czech and Ladakhi students which have been developed in joint ‘e-lessons’ conducted during the period of three years according to the methodological handbook La Ngonpo were also exhibited.

A documentary movie that describe the real yet different lives of two students living in two different parts of the world – the Czech Republic and Ladakh in India, was screened. A colourful cultural programme by students of different participating schools was also presented.

The Project Coordinator, Romana Vylitova said that the exhibition was organised to enable participants to see what students have learned and done through this project.

Moravian Mission School, SECMOL, Druk Padma White Lotus School, Ladakh Public School and Lamdon Model Senior Secondary School are the Leh based participating institutions from India, said Vylitova. The international educational project La Ngonpo focuses on multicultural and global education for pupils and students aged 12 to 16 years. Since 2010 the project has been in operation in India (in Leh-Ladakh) and Czech Republic.

However, it can be joined by schools anywhere in the world. According to the organisers the project enables students to learn about themselves and their environment as well as about their peers from another country.

“La Ngonpo” are Ladakhi words meaning “the blue pass”. “Mountain passes used to symbolize the possibility to meet on the other side of the range; for us, the pass is represented by the web portal,” the project believes.
Posted by Gareth Wall at 15.7.12 No comments:

Some of the group might like to know that Beyond Bokhara, Garry Alder's biography of William Moorcroft---who spent 2 years in Ladakh, 1820--22, & wrote what is still one of the best accounts of the region---is now republished. The book isn't available on Flipkart, but can be ordered from the publishers, Low Price Publications, New Delhi. Website is www.Lppindia.com; e-mail info@Lppindia.com. (Thanks Janet)
Posted by Gareth Wall at 15.7.12 No comments:

On Friday, 22ndJune 2012 Dr Sonam Wangchok, Secretary of the Himalayan Cultural Heritage Foundation and of International Association of Ladakh Studies (IALS) hosted a workshop at Lonpo House Lecture Hall, Leh Palace for Ladakhi youth who are interested in undertaking research in Ladakh. The aim of the workshop was to introduce potential students to the various research methods and research projects currently taking place in Ladakh, and to discuss how the IALS can assist young Ladakhi researchers in supporting and publicising their work. Ph.D Fellows and Anthropologist Elizabeth Lane Williams-Oerberg (Aarhus University, Denmark) and Andrea Butcher (University of Aberdeen, Scotland) presented their research projects and discussed the experience of preparing for research in Ladakh. Following the presentations the floor was opened to questions and a discussion regarding what assistance aspiring researchers need to get started with their projects, where to find information about previous and current research, and who to contact for assistance. The following bullet points are the recommendations for assistance the students requested:

Ø  IALS/HCHF to showcase all the different research in Ladakh and who is working on what.
Ø  Directory of researchers and their topics or specialities
Ø  Create a library or catalogue of bibliographies for previous research in Ladakh, organised by discipline.
Ø  Partnerships between Foreign and Ladakhi students
Ø  Directory of Ladakhi students willing to work as interpreters.
Ø  Notice board for Ph.D and research opportunities outside India.
Ø  Electronic access to academic journals. (Digital Himalaya and other websites can be accessed on the IALS website.)
Ø  Awareness workshops to be held in other parts of Ladakh and Zangskar to give awareness to Ladakhi youth of the IALS and research opportunities.
Ø  IALS or research forum Facebook page.
Ø  Recruit students returning from university to give advice about research for young Ladakhis
Ø  Organise a pool of educated research students to act as tourist guides and give information for tourists.
Ø  Send research to others in similar fields and obtain feedback.
Ø  Encourage young researchers to publish essays in Ladakh Studies journal.
Ø  Organise a two-day workshop to introduce students to research methods
Ø  Have a dedicated student webpage on the IALS website for information on research protects, opportunities, publications, and seminars.
Answering the points Dr Sonam Wangchok introduced the restarting of IALS blog (http://ladakhstudies.blogspot.co.uk/) and encouraged research students to see IALS website (www.ladakhstudies.org) and HCHF website (www.heritagehimalaya.org) for resources and latest information related to researches, books and events. At the same time he strongly supports the idea of awareness workshops in other parts of Ladakh.

Posted by Sonam Wangchok at 4.7.12 No comments: